SKETCHING is a great exercise for getting the creative juices flowing as an end in itself, or prior to painting. I usually carry a small pad wherever I go.

Morning sketches – my efforts to make quick, small images in a pad regularly before breakfast using a continuous line (intentionally allowing no time to think). As soon as the pen touches the paper, it stays in contact until the end of the sketch (no preliminary sketch). I set myself the challenge of making them before the kettle’s boiled and tea’s brewed – I don’t always manage it though! Fibre tip pen (0.7mm) on cartridge (drawing) paper (the exception being the duck ornaments, which was a 4b graphite stick (all I had to hand at the time). Usually size about 20cm X 14cm.

General sketches made at various locations. Usually small scale for speed and for the ease of carrying the pad in a pocket. Usually done on cartridge, but sometimes watercolour paper with black fibre tip pen (0.7mm or 0.8mm). Often they’re done in two to three minutes – fifteen to twenty or a little longer if watercolour (from pans in a small sketching set) or ink is added. Sketchbook size usually 20cm X 14cm or 15cm X 12cm. No preliminary sketch before making the linework. I’ll often start with the point that interests me and position the first mark so as to allow room for the rest of the composition, and then work outwards from there. I tend to leave lots of white space in this style.

Sketch development – two approaches: Both were made in a Hahnemüle watercolour book. The first examples show the initial drawing of the church (on Maria Therese Strasse, Innsbruck), then after having added watercolour (I was sheltering beneath an arch opposite, trying to keep the painting out of the rain). 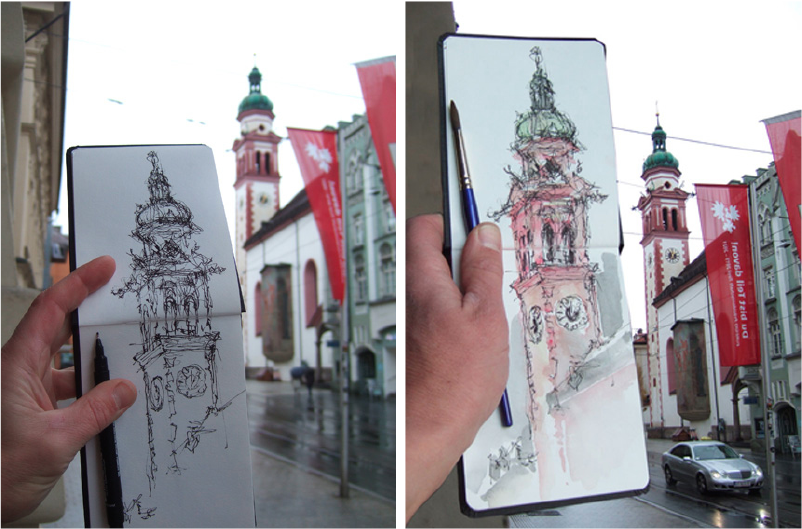 The following two examples show a very quick line sketch of the disinterested dog held by a leash beneath the Golden Roof in Innsbruck old town. I stopped drawing after a few seconds and took the photo before the couple moved away, not wishing to forget how I’d simplified this little scene almost to a single continuous line. 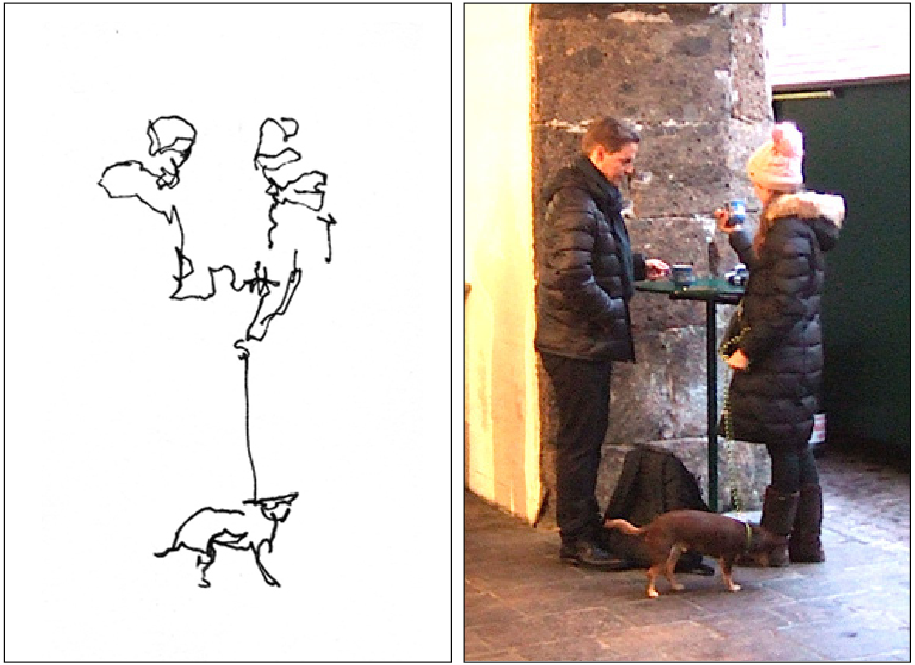 Quick figures in line and line & wash: This is good observational practice, and to keep active in between more involved sketches (made in a Fabriano Quadrato Artist’s Journal):

Location sketches: More time was spent on these as thinking ahead to them being starting points for paintings, so more attention was given to tonal range and composition. Sketchbook size usually 30cm X 42cm. I often use charcoal sticks, sometimes with the addition of oil sticks, oil pastels or inks.