Updates of my experiences in this unique wild landscape 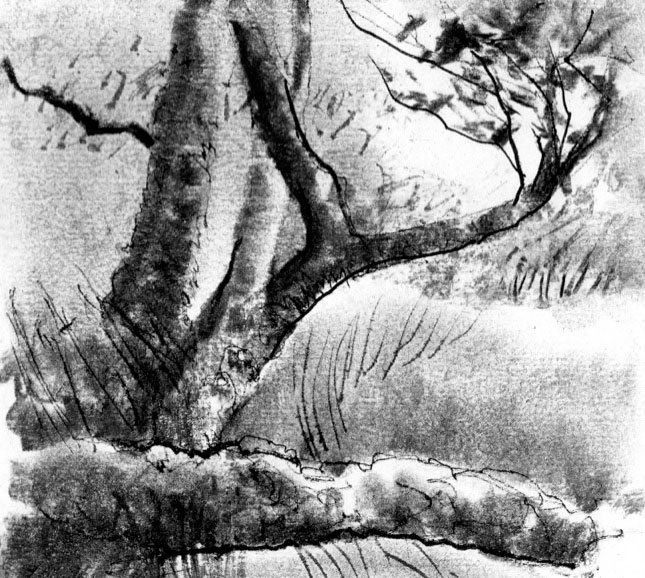 JOURNEY & ARRIVAL: Delighted at having been selected for this residency, I set to work developing the ideas set out in my proposal. This is an ideal opportunity where I’ll be able to combine my artistic work with a passion for wild natural environments developed through long experience in the mountains and wilderness. In mid October 2019, after a trip through the magnificent mountains of Glencoe, I arrived at the Corran Ferry (one of the last such crossings existing in Scotland), where I was greeted with a blast on the horn from the skipper – which was either to say hi, or telling me to get a move on (no doubt, the latter!).

After the calm 5 minute crossing at the Corran Narrows, I drove up the slipway at Ardgour, and on to Ard Daraich for a meeting with artist Anna Raven to discuss an outline of my residency where I also met with her husband Norrie Maclaren. I then made my way to Ferry Cottage, which they operate, set on a promontory on the eastern shore of Loch Aline.

After an evening walk along the farm track to get to know the area, I returned for tea and toast. Settling in the glow of the wood stove, I went through some notes and sketched ideas for the planned exploratory walks for my first day on site. Wild and remote, the Rahoy Hills Nature Reserve on the Morvern peninsula is the most biodiverse area owned and managed by the Scottish Wildlife Trust and Ardtornish. Today’s visual appearance, whilst being stunningly engaging artistically with endless opportunities for creative expression, has been influenced by a history of modification and management by people, at times in balance with the rest of nature, but at other times this has led to exploitation, where resources have been overused nearly to the point of exhaustion, depleting the land of vital nutrients, limiting the range of species that can live there. The dedicated people who now work at the reserve are bringing this unique area back into balance for the benefits of the plants and animals that use it as their home, and for the future generations of people who will increasingly come to understand its value and may wish to visit. My role will be to support this work and to add a creative dimension to developments.

More information about the Scottish Wildlife Trust at the Rahoy Hills reserve.

My intention on this occasion was to get an overview of the site, develop ideas for future work and visits, and to meet with key people involved in the work of the reserve.

DAY 1: The first day of my residency began with some morning sketching at the cottage, after which I packed up my outdoor gear and art materials into the van. During research beforehand, I’d discovered there was a memorial on the reserve dedicated to naturalist Brian Brookes. I managed to buy a copy of his book, and this came with me (the memorial being one of the first things I sketched on site). I drove to Acharn, to meet with reserve ranger Steve Hardy. During a walk through the mature oak woods overlooking Loch Arienas, it soon became evident that Steve has a wealth of information gleaned from his many years spent working on the reserve, and I was only just scratching the surface of his experience. His role involves species monitoring, keeping invasive species in check, engaging with the public – even path maintenance. The reserve has several distinct areas, and internationally important sites for plants that exist both at altitude and low down in the gorges. He told me about some of the wildlife that live in the woods and also the migrant birds – redwings –  that had recently arrived that flocked over our heads appearing like leaves in a stormy wind. He spoke about issues affecting the woods such as when trees topple and fall on to fencing, which, if several deer then managed to gain access, would eat the succulent ground vegetation and strip saplings, preventing new growth and inhibiting regeneration, and for this reason there are many control measures in place such as extensive fence enclosures which also keep out nearby cattle, and these are largely successful.

With so much to see, I decided to start getting a feel for the area through taking photographs, rather than continually stopping to sketch which would have interrupted the flow of Steve’s informative tour. The morning was mostly overcast, but this added to the dramatic Tolkienesque atmosphere, interrupted only by shafts of strong sunlight that shone through when breaks appeared in the clouds above. In this exceptional Scottish example of atlantic rain forest, dense moss matting covers most of the oak trees here, indicating the present cleanliness and humidity of the air, contrasting with times centuries ago when these trees were coppiced for use in the numerous charcoal burning sites, over ninety of which have been discovered through work largely carried out by archaeologist Jennie Robertson. Pioneering birches, share the area with holly and rowan, and the whole area is home to a vast array of species, both plant and animal – even, as I was told – the elusive badger and pine marten. This was in marked contrast to the change in ground cover with the lack of significant trees, encountered on our walk back over the hillside above the enclosures. Although, as Steve explained, this is in marked contrast to the summer months where the area displays an abundance of plants with the associated insect life, that provide food for the birds and mammals further up the food chain.

Later in the day, I walked out again through the woods, but this time from the east and to Arienas point, sketching and making colour references for future work with charcoal, ink, a few watercolours and oil pastels on cartridge paper size 14cm X 13cm. 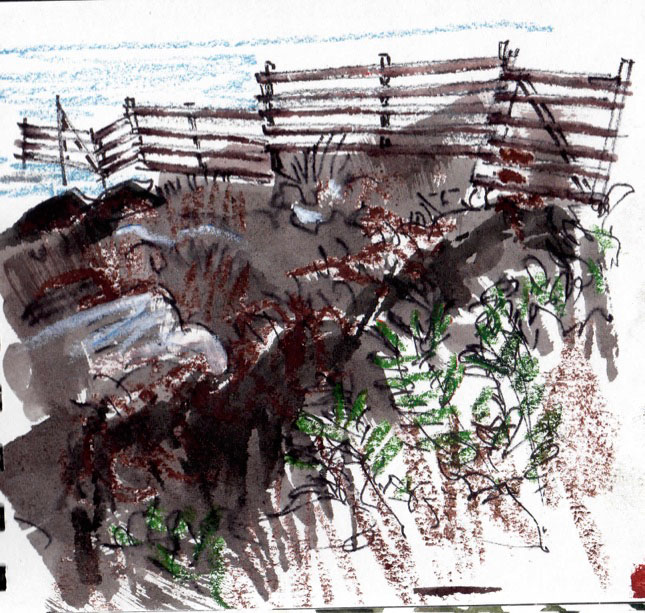 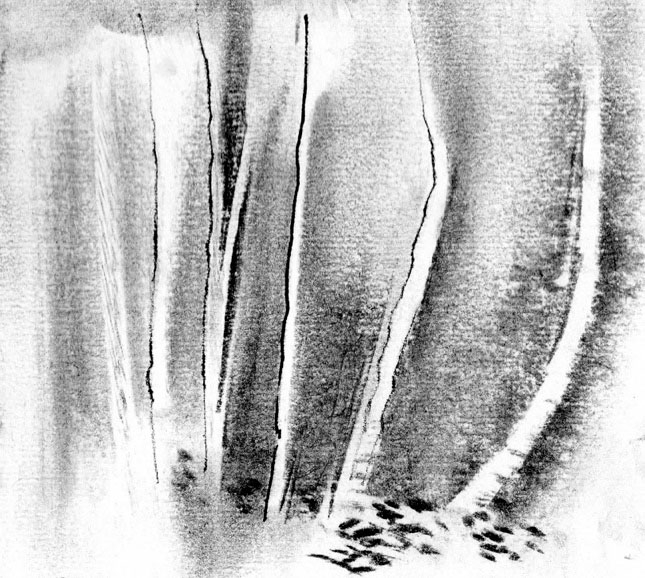 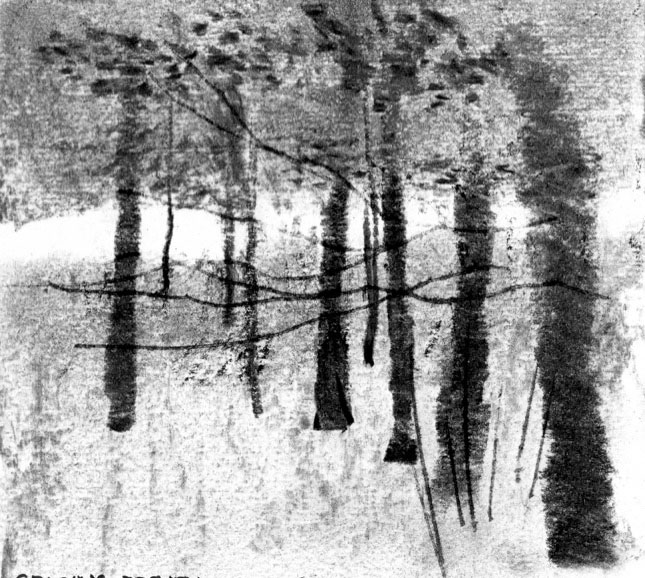 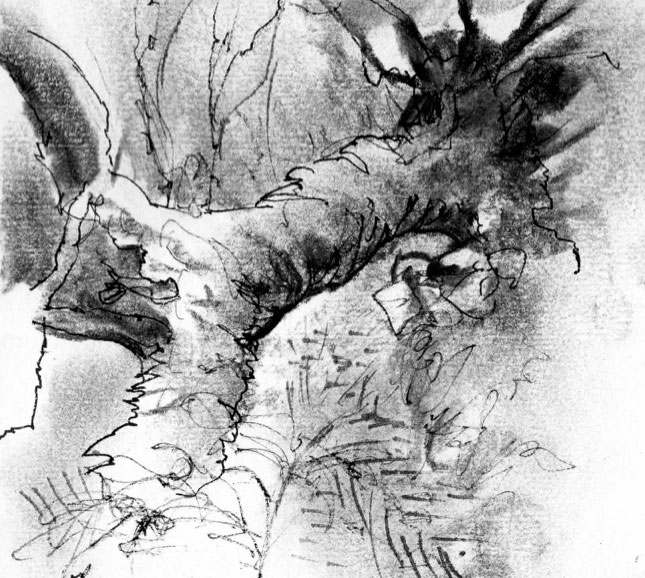 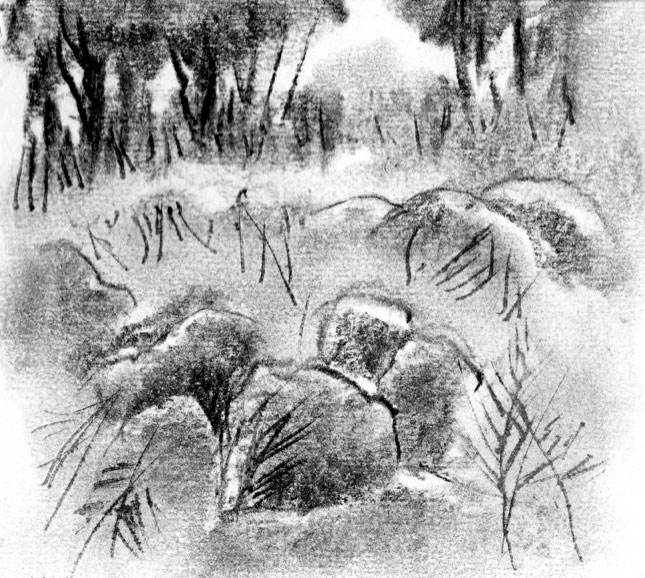 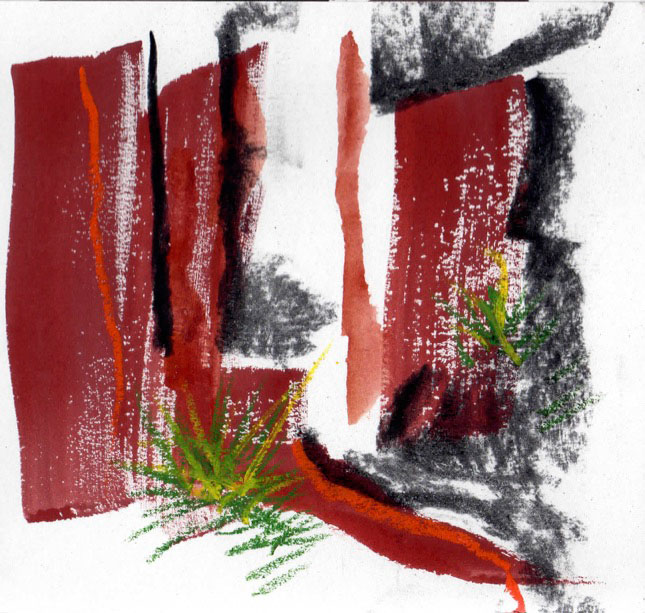 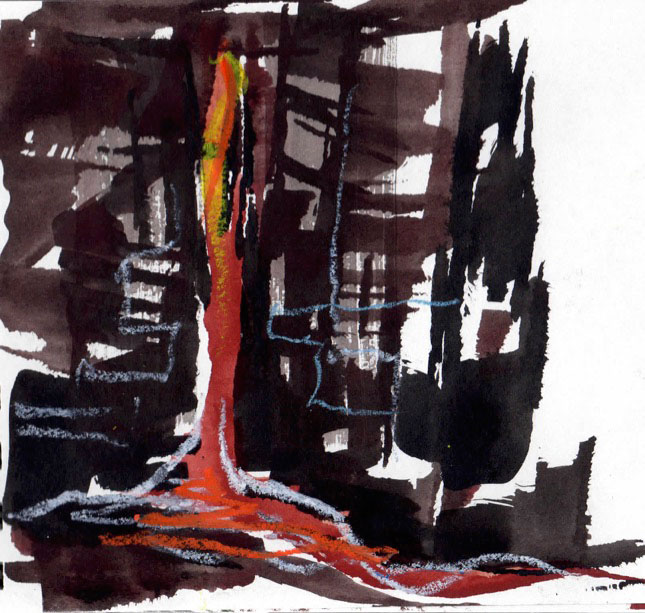 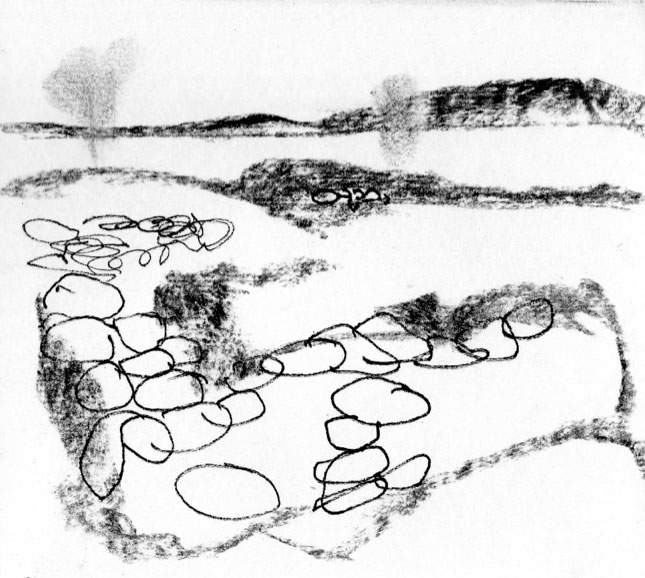 On the shore, I was greeted with a cluster of empty drinks bottles. It’s disheartening to see that even in a place such as this, human detritus still manages to find a way in.

I then spent time drawing with oil pastels and ink in the dramatic gorge above the enclosure at Arienas Burn. 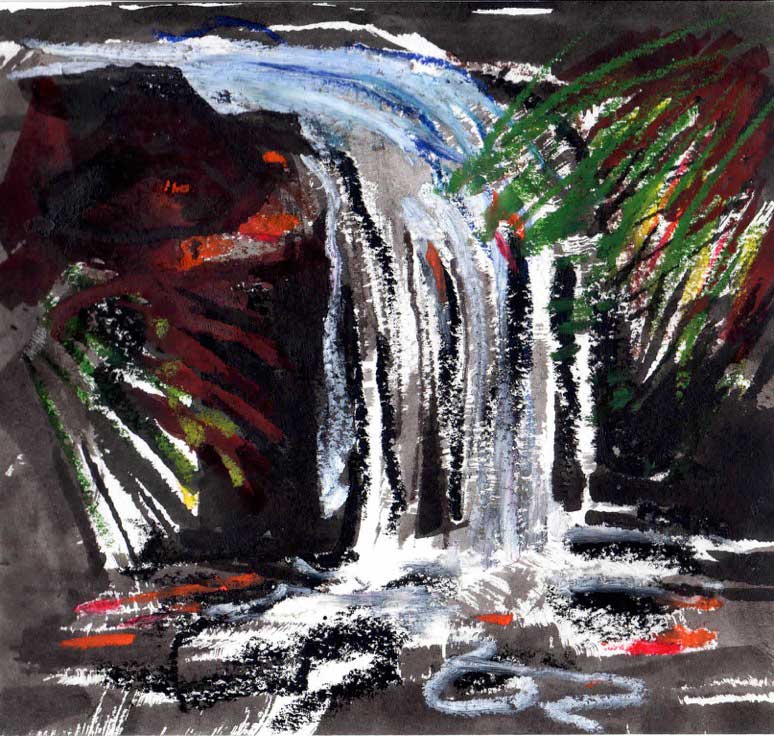 In the dimming light, I made my way back, on the way startling a large stag I’d interrupted while eating with head down behind a boulder only a couple of metres away, which fled as soon as it saw me. I then continued on to the van watched by a pair of curious cows. My first day of the residency came to a close at the cottage where I went through my photographs, did some painting and planned the next day from the cosy comfort of my sleeping bag with a large mug of tea.

DAY 2: The following day began in glorious sunshine, and while getting things together for a trip, I decided to start work at the cottage on some painting ideas of fallen ‘phoenix’ trees, common in many places I’d seen on the reserve, but which still grew vigorously from a horizontal position. Watercolour and oil pastel on Arches paper 75cm X 35cm. 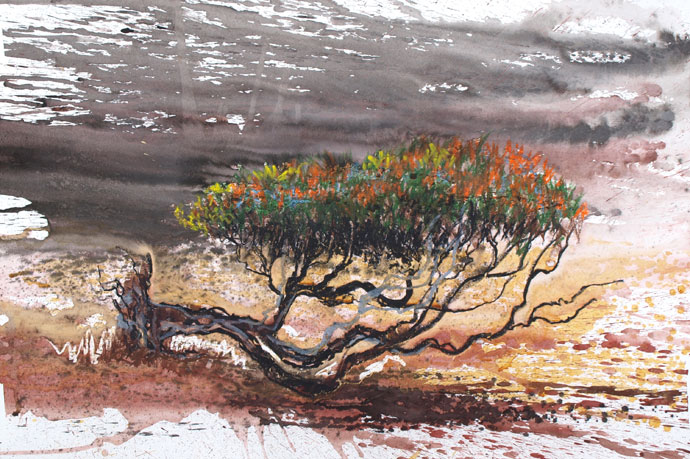 However, while facing the window overlooking the loch by the side of the easel, I was increasingly aware of movement in the mirror-calm water. Through binoculars I could see this to be an otter repeatedly diving and coming up with an eel it supported in its paws to chew. This went on for some time and was a complete – but welcome – distraction from my work. After a while, it purposefully swam to shore and I crept outside to be fortunate enough to see it come up onto the steps only three metres away from me, where it appeared to scent mark a mooring ring, before calmly slipping once more into the water. What a lucky close encounter – unfortunately though, I didn’t get a photo. It wasn’t easy to get back to painting indoors again, so I went out sketching in the afternoon to the woods instead.

DAY 3: In the third day of October sunshine, I walked the access track north, where I was joined for lunch at the ruined steading by a palmate newt that allowed me to hold it in my hand to photograph, before it crept back into the undergrowth. I then continued on to the bothy owned by Ardtornish estate. Although the building itself – once a farm steading – needs to be kept locked, this is a superb vantage point from which to view the surrounding hills outside the reserve itself. After more sketching and photos, I made my way through rough terrain, awkward underfoot, needing to be alert for numerous deep potholes which were concealed by the long grass and bracken, managing to miss stepping on several fox moth caterpillars.

I continued up to the high point of Monadh Meadhoin where I had excellent views of the two main hills of Beinn na h-Uamha and Beinn Ladain, which will be the focus of further trips, then carried on further west down to the lochan.

I went back to rejoin the track and walked down to the car park at Acharn for a meet up with Alasdair Firth, now employed by the Woodland Trust. As with Steve, he has a depth of knowledge that results from his passion for the natural world and concern for the issues that affect it. On the way down to the gorge at Black Water, he showed me small stumps of oak which are some of the last remnants of coppicing for charcoal which ended 150 years ago. He pointed out examples of internationally significant mosses and liverworts – bryophytes – which exist in the damp micro climate contained between the rock walls which bound the burn, and spoke about some of the factors that contribute to depletion of natural resources such as carbon. These were less of an issue when people lived out their lives on the land in one area. Alasdair’s informative tour gave me more themes to explore in my ongoing work. I later collected some deer trampled bracken, the ends of which looked like brushes dipped in ink, which I may decide to be incorporated into an artwork.

DAY 4: I was able to stay in Morvern for another day where I was able to visit the gorge again, this time sketching and painting the boulders using the naturally occurring pigments in the mud from the burn. 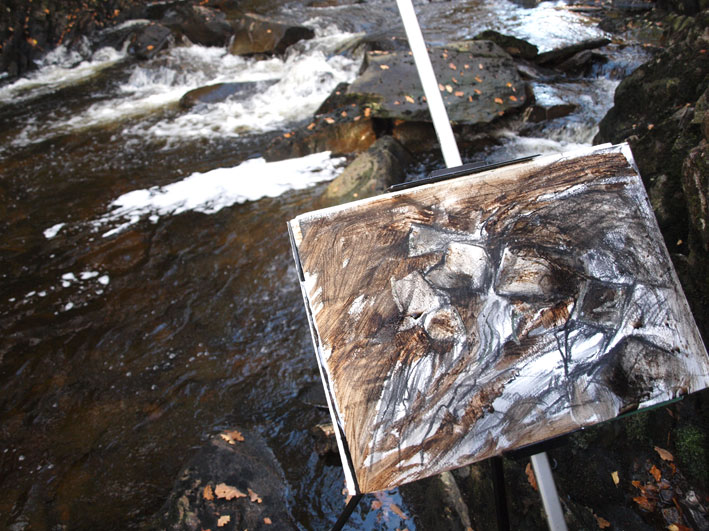 I also produced a long concertina fold piece in the oak woods. By placing leaves on the pages I was able to make a close match of the vibrant autumn colours. Both a bee and a grasshopper came and settled on the work as I painted. I was careful to brush them off before I closed the book to prevent them being  immortalised within the pages – even though I may have received comments about how realistically I’d painted the insects!

This was a fantastic start to my residency. There will be regular posts covering my next visits, and dates of displays and gallery exhibitions as they come up. Welcome back soon!

More information about the Scottish Wildlife Trust at the Rahoy Hills reserve.